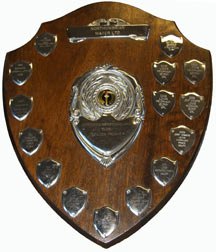 The Kielder Trophy is to give recognition and encouragement to the all round working Newfoundland, one who performs well in the working tests for both Draught and Water.