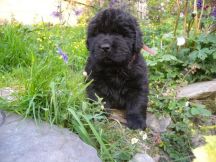 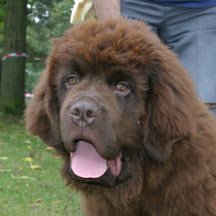 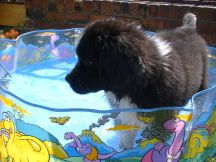 You have decided the Newfoundland is the dog for you - how to set about choosing the right one.


Most breeds have their own particular health problems, with Newfoundlands it's hips, hearts and cystinuria that require particular attention.


Hip Scoring - What does it mean?

A score is given to a dog’s hips by a panel of veterinary experts after studying an X-ray of its hips. The X-ray is usually taken under a general anaesthetic by the owner’s own vet and then sent to the British Veterinary Association (BVA) for scoring. Scoring involves a detailed study of 6 aspects of the formation of the hip joint.

A certificate is sent to the owner with the score of both hips recorded on it.

Currently the average hip score is 26 total (i.e. both hips added together = 26) but remember this is based on limited data since poor hips are often not scored and a large percentage of pet dogs are not hip scored. It is recommended by The Northern Newfoundland Club that only Newfoundlands with a below average hip score are used for breeding since heredity plays a large part in this disease.


Heart Testing - What does it mean?

There are two ways of heart testing:

1) The first method is by a vet listening to the dog using a stethoscope for any murmurs or irregularities. This is called an Auscultation.

The dog's heart should be examined by auscultation by two veterinary surgeons on two separate occasions. Both veterinary surgeons must have either a Certificate in Veterinary Cardiology (Cert VC), a Certificate in Small Animal Cardiology (Cert SAC), or a Diploma in Veterinary Cardiology (DVC). A grade is given on each occasion out of 6. Only dogs awarded a grade of zero on both should be used for breeding. Two certificates will be produced and the breeder should be happy to show you these. However, The Northern Newfoundland Club expects that any dog or bitch to be used for breeding should be tested by the second method of Testing, Colour Flow Echo Dopplering.

2) Colour Flow Echo-Doppler examination (echocardiography). This is the most reliable method of diagnosis for heart defects. The anatomy of the inside of the heart is visualised using an ultra-sound scanner and the efficiency of the contraction and speed of the blood flow within the heart can be measured. This can be done with the dog resting quietly on its side on top of a special table. This must be performed by a Veterinary Surgeon with a Diploma in Veterinary Cardiology (DVC).

Providing the valve measurements and speed of blood flow lie within set parameters and there are no defects apparent they are given a classification of normal. Again a certificate of this examination is produced and the breeder should be happy to show you this.

An Equivocal result is borderline and often indicates a high rate of blood flow, while an Abnormal result means the dog should never be bred from. The Northern Newfoundland Club expects that all breeding stock should be echo dopplered every two years in line with the Club's Code of Good practice for Breeders. Only dogs and bitches free from abnormalities should be bred from.

Good breeders will have (or may have copies of) all the relevant certificates for the hips, elbows and hearts of the sire and dam of the litter and will be only too happy to show you them.


CYSTINURIA - What is it?

Cystinuria is an inherited disorder of the urinary tract, which leads to the formation of crystals or "stones". It is a painful condition that can keep recurring. A check swab is taken for DNA testing. The result can be one of 3 outcomes.

The only way to eliminate this debilitating disease is to breed a clear dog to a clear bitch. Then the puppies will be clear.