All dogs, both pedigree and non-pedigree can suffer from health issues. In the case of pedigree dogs certain health issues tend to be more common in some breeds than others. For Newfoundlands, the principal health concerns are;

Of all health problems this is the one which owners of large, deep chested breeds of dog should be very aware of. When Bloat occurs untreated dogs usually DIE very quickly, sometimes in as little as six hours from the appearance of the very first minor signs.

VETERINARY HELP SHOULD BE OBTAINED WITHOUT DELAY, EVEN IF YOU ONLY THINK IT MAY BE BLOAT

What is Bloat? It is where the stomach fills with gas and fluids and twists on itself. It begins with an abnormal build up of gas in the stomach. Gastric juices are produced and the normal mechanisms for emptying the stomach fail so it begins to swell. The stomach is fixed where the oesophagus enters and once it starts to swell it begins to rotate around this fixed point. This twisting closes the inlet and exit so food or gas cannot escape. Any food present will continue to be digested and ferment thereby increasing the dilation. This cuts off part of the blood supply damaging the tissues of the lining of the stomach. If this is prolonged a portion of the lining may die and the stomach can rupture causing peritonitis. The swelling can trap blood vessels to the liver, spleen and heart and toxic shock will occur. Symptoms may vary and not all dogs will show all symptoms:
What should you do if you suspect Bloat?

Be alert and know your dog. Call your vet (or the nearest vet if you are not at home) and explain what you suspect or get someone to call and explain you are en route. Take the dog in without delay, TIME IS CRITICAL.

We strongly recommend that you read our page on reducing the chances of bloat occuring.

A congenital disease that causes the hip joints in affected dogs to grow abnormally. This causes the joint to become loose and wobbly and eventually leads to a form of arthritis which is commonly referred to as degenerative joint disease (DJD).

The Good Practice guidelines for breeders include a requirement that both dogs and bitches used for breeding are 'hip scored' under the KC/BVA scheme and matings only considered with the aim of reducing the average hip score of the breed. The current average is 26 as of 01/11/2008 and is available from the Kennel Club.

Breeders are encouraged to have their dogs elbow scored and to take this into account when planning matings to reduce the incidence of this problem in the breed. As a large breed the incidence of some evidence of elbow dysplasia can occur in 31% of all puppies bred to parents who score 0/3 but this rises to 56% where both parents score 3/3. Some dogs are very affected by an elbow problem whilst others can score 3/3 but it cause them no difficulty other than arthritis in the joint in older age. This is because the condition can be caused or exacerbated by the way a puppy is reared regarding weight, exercise and injury. See Newfoundland Dog Health for further details. 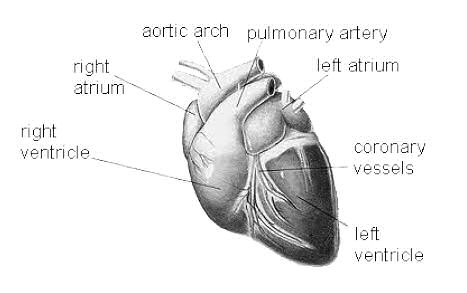 A disease of the heart muscle that results in weakened contractions and poor pumping ability. As the disease progresses the heart chambers become enlarged, one or more valves may leak, and signs of congestive heart failure develop.

Also referred to as subaortic stenosis. Anatomically, the heart is divided into four chambers separated by four valves. The heart valves ensure that blood only flows in one direction through the heart. The aortic valve separates the main pumping chamber (left ventricle) from the aorta, a large blood vessel that carries blood from the heart to the body. With SAS, there is added tissue below the aortic valve (hence subaortic). This abnormal tissue creates an obstruction (stenosis) that the heart has to overcome to pump blood to the body. This stenosis makes the heart work harder than normal. A heart murmur is created by blood being pumped across the stenosis into the aorta.

The Newfoundland Club publishes annually a report which includes the disclosed results of Heart Tests for Newfoundlands. A copy can be downloaded here.


Much of the above information is reproduced from the excellent article by Sue Benyon which appeared in the February 2009 issue of Newfletter. We strongly recommend that you download and read the article carefully, it contains much more information than we have included here.